The Long Dark Wiki
Register
Don't have an account?
Sign In
Advertisement
in: Pages with update history, Wildlife
English

View source
watch 02:30
Dead Cells Final DLC - The Loop
Do you like this video?
Play Sound

Wolves are iconic wildlife in The Long Dark. In Survival mode and in Wintermute wolves are a primary threat to survival on Great Bear Island, and can be found roaming all major regions.

Wolves (not to be confused with timberwolves) are a common predatory animal found on Great Bear Island; they may appear alone or in packs of up to four. They hunt rabbit and deer, attack the player (except on Pilgrim), and flee from bear and moose.

At close distances wolves will chase and attack the player, resulting in a struggle. A single wolf attack is typically not fatal, even if lost (except on Interloper); however the condition loss, blood loss, and infection can cause death soon after.

Wolves can be avoided by keeping distance, sneaking, and not carrying smelly items. These smelly items can also be dropped as lures to temporarily distract wolves. Wolves will also investigate thrown stones which land nearby.

When killed, wolves provide 3.0-6.0 kg of raw meat, a wolf pelt, and 2 guts. Once cured, wolf hides can be used to craft the wolfskin coat. On Stalker and Interloper mode, wolf meat both cooked and raw carries the risk of intestinal parasites.

Wolves feature the most varied AI behavior and animations of all wildlife in The Long Dark.

Wolves chase nearby rabbit, deer, and the player. On detecting a target a wolf will bark and give chase, sprinting at close distances and killing prey animals on contact, or beginning a wolf struggle with the player. After a kill, wolves will eat their prey's carcass until no harvestable yield remains ("Ravaged").

Breaking a wolf's line of sight, keeping scent low and running may help lose a stalking wolf. Wolves usually will not approach campfires or lit flares, and cannot go indoors or inside vehicles. Climbing felled trees or rock outcropping may also cause a wolf to lose interest or flee.

Individual wolves may stop and howl at the sky, shortly after others nearby will stop and respond. This can be very useful to gauge how many wolves are in the area, and in which directions and distances.

Wolves may be found in all major regions wandering, hunting or defending kills. Should they encounter the player by any of their senses, they will issue a bark and begin stalking at a walking pace. Prolonged stalking may result in a wolf giving up or charging the player. A stalking wolf will immediately charge if the player attempts to aim any weapon (stones included). For detailed information on wolf behavior see: "AI and Spawning", below.

During an aurora all wolves will glow green and act erratically: barking regularly and running in circles. During this state wolves are more aggressive and may detect and attack the player at longer distances; they will also not flee from torches, flares, marine flares or be repelled by campfires. Struggles against aurora wolves are also harder, however they may be scared by artificial lighting brought to life by the aurora: including street lamps, car headlights and the flashlight's "high-power" mode. Revolver, hunting rifle and distress pistol shots are still effective at frightening aurora wolves.

A wolf that has recently killed a prey animal will begin eating it. Feeding continues as the carcass' yields are reduced until none remain. While it is eating the wolf's perception is reduced. Feeding wolves are unique in that they are the only wildlife which may still attack a player on Pilgrim difficulty.

Any items that produce scent (any meat, gut, quarters, etc.) will will attract wolves if carried, and may be dropped as bait to lure them, which can be used to flee or kill the wolf. If a wolf detects a prey animal while stalking the player, it may pursue the animal instead. While a wolf is approaching and escaping with bait, they are still able to detect the player and attack if too close.

Wolves are afraid of fire and will generally not cross over it, instead keeping a 3 meter distance from it at the minimum. This makes campfires, torches, and flares valuable wolf deterrents.

Throwing torches and flares also provide a chance to interrupt a wolf's charge; wolves stopped this way may either flee or continue stalking the player.

A guaranteed way to scare off a wolf is to throw a lit torch or flare on the ground (before the wolf has begun charging), walking over the spot where it landed, and then aiming your weapon at the wolf. The animal will charge at you, stop a few meters away, and then flee. This trick is fundamental to survive on Interloper difficulty.

Wolves will flee from hunting rifle and revolver reports, as well as the impacts of nearby bullets and arrows.

Wolves investigate thrown stones, and may flee if a stone lands near or hits them. If thrown near idle wolves, they will investigate before returning to their old route. This can be exploited to scare wolves from their kill, or temporarily relocate wolves from areas. 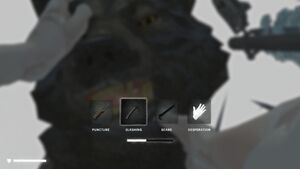 Wolves within 15 meters of the survivor will sprint towards them and lunge, beginning a struggle. The player will be prompted to select a tool from their inventory to defend themselves with, followed by the player and wolf fighting, damaging one another's condition and possibly tearing the survivor's clothing or causing blood loss. If the player fails to scare off the wolf and is not killed, they will faint and reawaken to the wolf walking away. It is common to survive a wolf attack particularly at high condition and on lower difficulties.

When a Wolf attacks the player is prompted with three options for defense, based on the tools in their inventory. Possible weapons are listed here in order of decreasing effectiveness*.[1]

*This list assumes you want to kill the wolf, and that you are revolver skill level 5.

The Revolver is the most effective as it not only works as a bludgeon, but can also be fired once the struggle bar reaches a certain point; firing will immediately end a struggle. Firing the revolver requires it to be loaded, and has a chance to instantly kill the wolf. It should be noted that at lower Revolver Firearm skill levels, the revolver is generally outclassed by other options, and will only be the best option after reaching Revolver Firearm level 3.

If attempting to end the struggle as quickly as possible, the Heavy Hammer will likely be the best option in most scenarios, unless the player has a Revolver and high Revolver Firearm skill level. The hammer carries a 15% chance to instantly end struggles and a 5% chance to instantly kill a wolf, making it the only tool capable of killing the wolf in the immediate struggle besides the revolver. The lack of guns and increased damage taken during struggles also makes it the best struggle option for Interloper difficulty runs.

Both the Hatchet and Hunting Knife will fatally wound a wolf and cause it to bleed out eventually; however, the hatchet is more effective and ends the struggle faster. The Prybar is the least effective tool and, much like bare hands, should not be chosen unless there is no other option.

Struggles are best avoided, but are sometimes inevitable:

A wolf may be killed by shots from any weapon (except stones). All weapons cause bleeding, which is certain death for the animal; but even injured wolves can engage in struggles. If not killed instantly, once a wolf finishes fleeing from a gunshot they will slow to a walk.

Wolves may also be injured or killed by hand during struggles; however, this poses serious risk to the player, their tools and clothing, and potentially consumes medical supplies.

Critical hits are random occurrences, but are more likely in designated critical areas. Wolves four such areas: the head and neck (100% chance of crit), the front shoulder and chest (100% for rifle, 30% for bow), hindquarters, and feet (0%). Critical hits may also occur in struggles randomly.

All shots from weapons which hit a wolf cause blood loss; or a chance after a struggle if the player used a knife or hatchet. Wolves lose condition at a rate based on where they were shot. Multiple shots cause additional condition damage from impact, but do not bleed out any faster. A wolf bleeding from multiple wounds will use the highest bleed out value.

Time to bleed out

Wolves exhibit multi-modal behavior based on whether/not they have detected an entity, the entity's type and distance, and their current stance.

A fixed number of wolves are present per region (living and dead), generated at wolf spawn points which they wander close to. Each spawn point can only house one wolf at a given time, though others may spawn at neighboring points. As in-game time progresses wolves may move between points. The number of active wolf spawn points, and the availability of some increases based on the difficulty setting.

Several wolves in The Long Dark are unique, and thus affectionately named by the community. These special wolves are special may only be encountered at their spawn points (unlike other wolves, which have variable spawn points and wander), though they are not more powerful or visually distinct from other wolves.

A wolf which was previously the only wildlife which could be encountered indoors.

In previous versions of The Long Dark (0.124) she could be found inside of the turbine room of the Carter Hydro Dam (Upper). Initially players reported her presence as a bug due to this unexpected location; however, she quickly developed a cult following on the Official Hinterlands Forums for her reputation of murdering unsuspecting new players. "Fluffy" was not officially named or mentioned in the changelog when initially added to the game, but after being named by the community her name stuck and she was officially mentioned in the changelog for 0.127. She seems to have gained access to the dam's interior through a broken window from the Winding River.

Fluffy was removed from Carter Hydro Dam (Upper) in Survival Mode in version 1.00 (August 1, 2017) during the Wintermute release, because her AI could not effectively pathfind the new interior map. In Story Mode: Episode Two her corpse can be found inside the Carter Hydro Dam by Mackenzie. The November 2019 developer diary stated that Fluffy would return, and as of the Errant Pilgrim update Fluffy resides inside the Last Resort Cannery, ambushing.

As of the Hesitant Prospect update despite Fluffy's previous re-introduction at Bleak Inlet she has lost her unique status of being the only indoors wildlife, as Rabbits may spawn extremely rarely inside of some caves, such as transition cave between Forlorn Muskeg and Bleak Inlet.

"Demon" Wolves are a Halloween-themed wolf variant found in the 4 Days of Night mode that have distinct glowing red eyes but behave like regular Wolves. If the player has eaten Pumpkin Pie recently, Demon Wolves will flee similar to Pilgrim game mode. When a Demon Wolf dies their eyes lose the red glow, making them indistinguishable from regular wolves.

A wolf chasing a rabbit

A wolf feeding on a deer

A wolf in stalking mode

A wolf lunges at the player

A wolf during the Four Days of Night Event

A dead wolf after harvesting meat 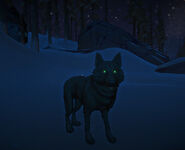 A Wolf during the night time