Resident wildlife consists of rabbits and occasionally a wolf will patrol the river close to the dam. Reishi mushrooms and other plants can be harvested in the area.

The area connects to the Carter Hydro Dam via two one-way paths, the exit being a door, and the entrance to the dam being a broken window on the other side of the dam. The window is accessible by passing the ledge. 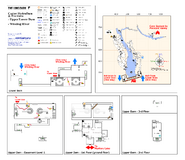