Edit
watch 06:00
Wiki Targeted (Games)
Do you like this video?
Play Sound

Will Mackenzie is one of two playable protagonists in The Long Dark.

Will Mackenzie works as a pilot for Jackrabbit Remote Transport prior to the First Flare event. He is the ex-husband of Dr. Astrid Greenwood.

When Astrid approaches him as her last hope of reaching a patient in an isolated region of northern Canada, he hesistantly accepts and agrees to fly Astrid to Great Bear Island.

After a tense conversation between Will and Astrid about a shared, traumatizing loss, the plane goes crashing down into the northern Canadian wilderness of Great Bear Island after a mysterious geomagnetic storm knocks out all power to his instrument panel.

Stranded far from the closest human civilization--lost, wounded and alone--Mackenzie must quickly master basic wilderness survival skills if he's to last long enough to find Astrid and understand how his world has just changed forever.

Will Mackenzie was a bush pilot prior to the "First Flare" event, a geomagnetic disaster that brought modern civilization to its knees.

Players experience Story mode through both Astrid Greenwood's and Will's point of view.

Will has short, brown hair and blue eyes. He also sports a relatively unkept beard and a faded red toque. He wears a light green sweater underneath an orange and blue parka, he has greyish black pants and brown leather boots.

Through the course of Episode 1, we learn that Mackenzie was married to Astrid Greenwood. The two separated some time ago, but both still wear their wedding rings. It is implied that they had a child together who passed away. His drinking is a source of disagreement; Astrid implies that it is excessive while Mackenzie himself states that it is under control.

After waking up and recovering from the plane crash a day after the First Flare occurred, Mackenzie makes his way out of the ravine he was stuck in, looking for Astrid along the way. He finds his way to a road leading him to the Town of Milton.

He arrives to find the town abandoned. Only one structure show signs of life.

He meets Grey Mother, an elderly, seemingly blind woman, in her home after she fires a warning shot at him. She explains to him how all the residents have fled after the storm, fearing they might become trapped in the town after the First Flare and a serious storm hit the town.

After she tasks Mackenzie with fetching her firewood and food, she explains to him how the power went out and people started to get cold, hungry, and scared, and, how, eventually, the few remaining fled. She mentions how a stranger (suggested to be Astrid) passed through the town with "angry voices" trailing her. Grey Mother tells Mackenzie to go investigate the tunnel at the end of the road.

Mackenzie arrives at the tunnel to find it collapsed. A crashed prison transport bus shows signs that Astrid may have passed through. In the bus the word "Perserverance" is written on the floor is what is presumed to be blood.

Mackenzie goes back to Grey Mother, and she gives him one final task, to visit the old farmhouse and retreive a key to her lockbox in the bank. After Mackenzie retreives her safety deposit box he finds out it was all for a piece of jewelery special to Grey Mother.

She tells him to bring the pearls to "Lily" at the graveyard. At first, Mackenzie is confused, but eventually realizes that Lily was Grey Mother's daughter.

Upon returning, she tells him the story of how her daughter died. Grey Mother gives Mackenzie the key to her daughter's trunk, where he finds climbing equipment. She tells him how to leave the area and to leave her behind, as she cannot escape the town, even if she wanted to.

Mackenzie bids farewell to Grey Mother and leaves Milton through the back mountains. His rope snaps on the way down, but he recovers and continues on to a cave. Upon entering and going through the cave he finds his way to Mystery Lake, where he encounters Jeremiah, the old Trapper, being attacked by the Old Bear. He grabs the Trapper's rifle and fires at the Old Bear, ending the episode.

After helping Jeremiah to his cabin and healing him up. Mackenzie awaits the Old Trapper's awakening. After Jeremiah wakes up, he tells Mackenzie to go search for better medication at the Carter Hydro Dam.

Mackenzie makes his way to old Carter Dam where he learns that it's been abandoned for a while. He finds the Control Room to be locked and that it needs power to be turned on. Mackenzie finds the meds and returns to Jeremiah.

Jeremiah awakens once again, after Mackenzie gives him the meds he assures Will that the only way they'll survive is if they kill the Old Bear. Mackenzie then asks him if he saw the Aurora when the First Flare event happened. Jeremiah says he has never seen anything like it before and that the wildlife has been acting strangely. Jeremiah proposes that the two help eachother survive.

After that, Jeremiah tells the tale of the Old Bear. We get to know, that the bear can only be killed by a spear, which has been used by the Spencer family. By the legend, the Bear Spear is still in the Spencer family's Hunting Lodge. On the way to the other side of Broken Railroad Mackenzie encounters the bear twice.

Mackenzie travels to the Lodge and finds the spear, than goes back to the Maintenance Shed to repair it. After accidentely falling over a dead survivor he finds a note from a group called the Forest Talkers.

Mackenzie then travels back to Jeremiah. Jeremiah declines Mackenzie offer to leave and suggest Jeremiah's Survival School as a means to help Mackenzie learn to survive. This is currently a side quest in Episode 2.

When we get back to Jeremiah, he tells Will, that he could turn on the radio, but couldn't get any useful informations, the old device is barely caught a bit of music and talking. We have to get some radio parts, from the signal towers in Forlorn Muskeg. The 3 towers are marked on the map. 2 of the 3 towers are guarded by the Old Bear.

On the way back to Jeremiah Mackenzie gets attacked by the bear at the tunnel between Mystery Lake and Forlorn Muskeg. (This is a scripted part, can not be avoided) The Bear attacks Will, knocking him unconscious, and then drags him to his den, which can be found at the top region of Forlorn Muskeg (yes, the map is still available). This interrupts the quest Signal to Noise and starts the quest What One Man Can Do. Will has to navigate trough the labyrinth-like den, to find his spear, and kill the bear finally.

Then Mackenzie gets back to Jeremiah, and gets immediately unconscious again. When wakes up, an Aurora is in progress, and the radio seems to work. Will sits down to the radio, and starts finding a frequency to communicate. During his tries, the radio breaks, and cannot be used again. Jeremiah of course, gets mad, but then reveals the sad truth: the radio is unusuable, Mackenzie has to deliver the message. Relay a message. Jeremiah tells Mackenzie about a person, who lives near Perserverance Mills and an important message that he needs to receive. That message is Wintermute. Soon after they say their goodbyes and Mackenzie is on his way to the Dam.

When Mackenzie reaches the Dam when the Aurora in the sky he encounters Methuselah who invites him to sit by the fire and talk a bit. He warns Mackenzie about the changes the world is going through and how humanity is paying the price. Mackenzie is confused but soon realizes the answer to the question "How Far Will You Go to Survive?"

He leaves Methuselah behind and enters the Dam. He makes his way through the Dam into the back room where he is hit on the head and knocked out. He awakens to find Mathis standing there, he begins to interrogate and punch Mackenzie, questioning him about Astrid's locked case. Mackenzie responds with some snarky comments just before Mathis reveals he may have encountered Astrid. After responding with desperation, Mathis picks up a hatchet and knocks him out. Ending Episode 2.

Will from the Story Trailer

A smashed photo of Astrid and Will 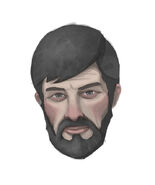 Concept art headshot of Will. 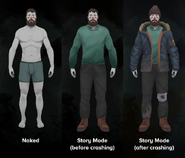 Will Mackenzie's paperdoll (Wintermute clothes are on 100% condition)