The region is known for temperatures below -20 °C, frequent blizzards and scarce resources. Much of the region is divided up by climbing areas making navigation tricky.

Timberwolf Mountain is the fifth region to be introduced in The Long Dark. It's commonly considered one of the most difficult regions to survive in due to frigid temperatures (sub -20C/-4F almost every day) and frequent blizzards (usually at least three per week). These conditions limit the time a player can safely travel outside with anything less than top-quality clothing, and the lack of warm indoor shelters means maintaining campfires is critical.

Timberwolf Mountain is described as pure wilderness with a mountainous expanse almost entirely lacking in man-made shelters. It has steep cliffs and ravines that require rope climbing to navigate to several locations.[1]

Timberwolf Mountain connects to Pleasant Valley via a rope climb and treacherously cold mountain pass in the southwest corner of the region, Ash Canyon via the eastern end of Echo Ravine or via a cave in Deer Clearing, and Blackrock via a cave system to the northwest of Andre's Peak.

Another defining feature is the large jet that crashed on the summit of the mountain. Wreckage from the plane is littered across the region; this includes both wings (one south of Echo Peak West, another on the summit); the tail section perched precariously on the edge of the summit; two wheels from the landing gear (one near the region entrance from Pleasant Valley, another also on the summit); and two engines (one at the western end of Echo Ravine, the other near Andre's Peak), as well as half the fuselage found near the top of the mountain.

Additionally, there are cargo containers from the plane scattered across the region, mostly near pieces of the wreckage, and with a huge cache in the tail end at the summit. When opened with a hacksaw, these containers can be looted for large amounts of items in a specific category (e.g., canned foods, medicines, or a class of clothing).

Timberwolf Mountain hosts extreme environmental conditions, requiring careful preparation to ensure survival during any expedition. Wolves and bears constantly patrol the main areas of the map and there are few safe shelters, with little loot inside of those that exist. Due to the limited resources and abundant wildlife, hunting and defending yourself are necessary to survive for an extended period of time.

A few hundred meters from the end of the pathway to Pleasant Valley is Crystal Lake and the Mountaineer's Hut, the only man-made structure on the mountain. With one of the few beds on the map, a fireplace, door, and the only workbench, it will likely be the primary safehouse within the region. It also is next to an ice fishing hut on Crystal Lake that can be used to cure Cabin Fever, and every region connection can be reached within several hours in-game from the Mountaineer's Hut. Another worthwhile shelter is the deep cave in the northeast near Deer Clearing, since it is next to multiple deer spawns and is close enough to a bear patrol area for easy hunting; however, it does not have much utility beyond being a good shelter during a hunting trip.

The path to the summit is fairly linear, and the tail end of the plane on the summit contains a huge cache of high-tier supplies. End-game manufactured clothing, multiple MRE's, a guaranteed distress pistol spawn, multiple cured pelts, and multiple tools/weapons can be found in the tail section.

There are many accessible locations within the Timberwolf Mountain region, including: 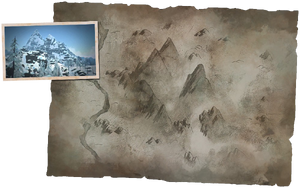 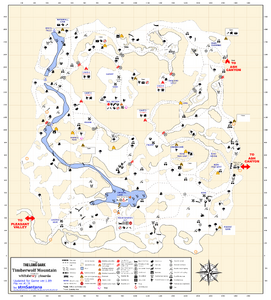