Edit
watch 02:56
Raise a Floppa - The Loop
Do you like this video?
Play Sound

The Hunted, Part One must be completed to unlock this challenge. During the challenge, the player chases the Old Bear throughout Mystery Lake. The bear will stop at numerous locations and wait until the player is close enough to attack, where they must shoot the bear with the rifle so it will continue retreating to its den. The Challenge ends when the player confronts the bear at the den.

The challenge begins right where Part One left off, with the player having entered the Trapper's Homestead and armed with the Bearkiller Rifle. The Old Bear can be heard outside banging on the door. The player begins with a Hunting Rifle and 10 rounds of ammunition.

The bear will be directly outside the homestead and must be shot with the rifle immediately or else it will attack the player. The bear cannot be killed so it is best to only shoot the bear when it has stopped at the designated locations. The bear will follow a path and must be shot to force it to continue retreating to the bear den. The easiest way to track the bear is to follow the bear prints in the snow and the drops of blood. If the player stops for an extended period, or if it heavily snows, the tracks will disappear.

The following list is the locations that the bear will stop at in order from the Trapper's Homestead to the den.

Warning: *Do not read if you do not want to be spoiled on the ending of the challenge.*

Once the player has finally reached the cave where the bear is hiding and gets close enough to the entrance, the Old Bear will charge out and pounce on the player. Shooting the bear will not stop it from attacking. The bear will slowly drag the character back into the cave. As the screen fades to black while the sounds of growling and chewing can be heard, the words To Be Continued appear, implying a third part to The Hunted Challenge. 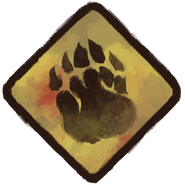 The badge awarded upon completing the challenge