A once pleasant valley, surrounded by mountains on all sides.

Pleasant Valley is one of the central regions in The Long Dark.

The region is a massive rural agriculture comprised of farmland and orchards, surrounded by forested rolling hills filled with coal mining, caves, waterfalls and the harshest weather on Great Bear Island. Pleasant Valley is also notable for hosting a large Birch Forest as well as a Passenger Plane downed by the Aurora.

Pleasant Valley connects to Timberwolf Mountain via a rope climb in the northeast near Prepper's Abandoned Cache, to Coastal Highway in the southeast through Cinder Hills Coal Mine, to Blackrock by following the road from Long Curve, which leads through Keeper's Pass South and Keeper's Pass North, and to Mystery Lake through a cave to the southwest, just west of Cascading Falls which leads through Winding River and Carter Hydro Dam.

Pleasant Valley is the third and by far largest region in Great Bear Island. It features few shelters outside of Thompson's Crossing to the south-east, so gameplay focuses on surviving the elements and living off the land, while navigating between cabins, caves and landmarks.

Frequent high winds and low temperatures, snow, fog and blizzards plague the region. Blizzards can be as cold as -48°C with windchill at -33°C in Episode 3 (Hardened Survivor). The stark contrast between rolling hills and almost featureless farmland can be disorienting, causing the player to quickly become lost in poor visibility. It also increases the risk of close range wildlife encounters.

Players must time expeditions carefully and make preparations for sudden changes in the Weather. Keep an eye out for landmarks to help navigate through the hills and trees, but beware: Bear, Moose, and Wolves (and in Wintermute: Timberwolves) that may wait just around the corner.

Pleasant Valley Outbuildings is a large barn located near the center of the map. The Outbuildings area also contains several abandoned vehicles, hay trailers, sheds, and tractors around the perimeter.

Pleasant Valley Farmstead is located about five minutes west of the barn (through the hay bale field). This location, like the barn, has a few vehicles scattered around the perimeter. The vehicles may contain supplies and offer temporary shelter from weather or predators.

The Farmstead are relatively close together Outbuildings, and Signal Hill, another useful indoor shelter.

See Locations for other potential bases, camps, and landmarks.

There are many accessible locations within Pleasant Valley including: 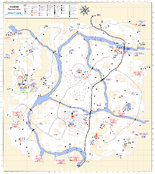 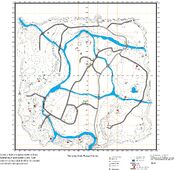 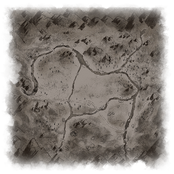 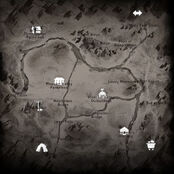 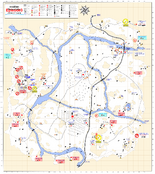