A transition zone between Coastal Highway and Desolation Point.

On the easternmost end of the area sits Abandoned Mine No. 3, which leads to Desolation Point. On the western side of the region lies the entrance to Coastal Highway. A frozen coastline curves along the south side of the road.

Wildlife in the area consists mainly of wolves and rabbits.

This transition zone has five locations to discover, including the connector mine (named "No. 3 Coal Mine") with Desolation Point. Besides the mine, the only interior location is the basement of the Abandoned Harris Home.

A couple of wolves patrol this zone (three in Stalker mode); because the region is so compact, it can be difficult to bypass predators without taking extra caution. Additionally, a couple of rabbits may be found around this area, as can one or two deer carcasses.

There is also a relatively large amount of fuel and medicinal resources scattered about, as well as two vehicles and a shallow cave. 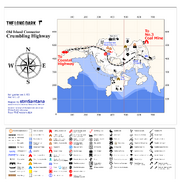 A map of Old Island Connector

An alternative view of Road Collapse.

A view of Old Island Connector from Coastal Highway entrance.

A view of the entrance to Abandoned Mine No.3 (West).
Español Русский
Community content is available under CC-BY-SA unless otherwise noted.
Advertisement