A small town nestled in the mountains.

Mountain Town/Milton is a region in The Long Dark on Great Bear Island centered around the small, recently abandoned town of Milton.

It is the setting for Episode 1 of Wintermute, as well as the eighth region added to Survival mode. Milton is accessible via Mystery Lake (through a cave near the Trapper's Homestead), Forlorn Muskeg (at Marsh Ridge through a Rose Bush climb to Milton Basin), and to Hushed River Valley (through a cave between the Trailer and Spruce Falls Bridge).

Milton, the major point of interest in this region, is located approximately in the centre of the region, and features a number of houses that can be searched for supplies, along with vehicles, a post office and a bank. While wolves do occasionally wander into town, they can often be avoided by ducking into a vehicle or building.

From the centre of the region, at the crossroads near the bank, players can follow the roads and travel out of town in four different directions. Heading northwards will take them via a woodlot to St. Christopher's Church, which features abundant natural resources nearby. From here, the region becomes less developed, and, while richer in natural resources, is frequented by wolves and the occasional moose. Continuing along the road, players will pass by a Trailer with a work bench, followed by the cave leading to the Hushed River Valley. The road ends shortly after Spruce Falls Bridge, where there are lots of vehicles from which to hunt the bear that spawns nearby.

Going out of town towards the east will first lead players to a Radio Tower after a short climb (no rope). Passing a shallow cave to the right (which can provide coal), players will encounter a small pond, which provides a safe place for hunting deer and snaring rabbits without the threat of wolves. Continuing up another root climb will lead players past another small pond, and eventually into a ravine where Mackenzie's Crashed Plane lies. Moderately valuable loot often spawns around the crashed plane.

Players leaving town towards the south will initially pass by the Orca Gas Station, located in the centre of a Wood Lot. The gas station can't be opened without a prybar, but once inside, usually yields a fair amount of food and a few items of clothing. The nearby crashed bus has some importance in story mode, but is merely a landmark in survival mode. Continuing southwards will lead players to Milton Park and the Picnic Area, featuring a small building and a rope climb down. Going down this rope and up the next will eventually lead players to Mystery Lake, after a walk along a frozen brook and through a cave.

Finally, players can head out of town towards the west. The first major destination is the Paradise Meadows Farm, which initially requires a key found nearby to unlock. The farm usually has an abundance of food, and mid-level clothing. Beyond the farm, going down two long climbing ropes will lead to Milton Basin. This location has lots of natural resources, but explorers should watch for the moose that spawns nearby. Walking along the frozen lake past the Hermit's Cabin (mostly destroyed, but offering a stove), players will find the connection to Forlorn Muskeg.

Mountain Town is a region rich in Cat Tails and Rose Hips. Cat Tails can be found in abundance along the banks of the river passing by Milton and at a pond in town, throughout the Milton Basin, behind St. Christopher's Church, near the Trailer, under the Spruce Falls Bridge, and near the Radio Tower. The region also features high density of Rose Hips, particulary around and near Mackenzie's Crashed Plane.

The region has a number of distinctive areas and named locations, most of which are located in or a short distance from the town itself: 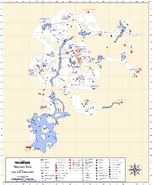 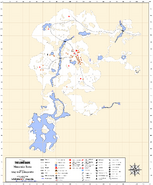 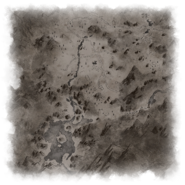 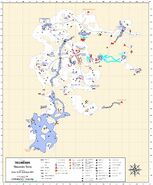