Moose are large, solitary animals. Although they can appear in any region, they do not spawn often and can be difficult to find. Their hides and meat are useful, but they are also relatively aggressive and can cause serious injury when provoked.

Moose are the largest and toughest of the prey animals and can be very dangerous if a player provokes them. Their walk and most movements resemble that of a deer, but a moose will charge the player if he or she comes too close (somewhat similar to the behaviour of bears). Before charging and trampling the player, the moose will adopt a stiff, threatening posture and snort to attempt to intimidate the player into backing off.

Moose have three paces: walking, fleeing and charging. They behave in a similar manner of deer when roaming around, stopping occasionally to sniff the ground or raising their heads to listen. Moose do not hunt the player but will attack if approached. Possible locations for moose are marked by scratches on trees; moose are hardly ever far from their marked areas, though they may despawn for extended periods.

Moose do not respond to the presence of other animals, but rabbits, deer, and wolves will flee from the moose. The bear and moose will actually walk right past one another.

Moose have a detection radius within which they become aware of the player. When the player is within the radius, moose will stop walking and turn to stare at the player, grunting and stomping on the ground as a warning. If the player fails to leave the radius immediately, the moose will launch into a charge attack on the player, except on Pilgrim, where they will flee instead. A moose will also immediately charge any player that fires a projectile or otherwise attacks/attempts to attack it. Much like the bear, the moose will only charge if it knows and can access the player's location. Otherwise, it will flee.

Once close enough to the player, a struggle ensues much like how a bear mauls the player (as in, you cannot fight back). The player will pass out after. Upon waking up, the vision will be disoriented. About 10% to 50% condition will be lost. The moose will still be near the player upon waking up but will not charge, provided the player flees from the area immediately.

If your character is trampled a second time, the second Broken Ribs affliction will be in effect for 168 hours.

Charging moose are not deterred by flares, torches, rifle shots, or arrows. Shots from the distress pistol are effective deterrents. Also, moose will turn and retreat if no navigable path to the player is available (e.g., in tight spaces like rock crevice or elevated position such as a rock formation).

Unlike other animals, moose do not bleed out. This can make killing moose a bit more difficult. They are fairly tough so multiple shots are often required. It is possible to kill a moose with one shot, most likely when hitting the head, but typically moose do not die before taking four shots from any weapon; Hunting Rifle, Survival bow, and Distress Pistol all seem equally effective. It is impossible to kill moose without a ranged weapon.

A moose carcass can be harvested for a very large quantity of high-calorie meat, as well as a moose hide and twelve guts. The huge amount of meat gained from a slain moose means that harvesting may necessitate multiple trips to transport all quarters/harvested meat portions.

The moose hide can be used to craft a Moose-hide cloak—a heavy, extremely waterproof, and armored coat—and a Moose-hide satchel, which increases carrying capacity by 5 kilograms, or roughly 11 pounds. The player can equip only one satchel at a time. The item offers no warmth bonus of its own, unlike the only other accessory, the wool ear wrap.

Moose can spawn in any region. Sightings are rare, however. Moose will often appear then disappear on their own. It can be several days before they return to any sighted location again.

A player can locate moose spawn locations by scratch marks on the bases of tree trunks in an area. Typically several marks will form a rough ring around a possible spawn area. 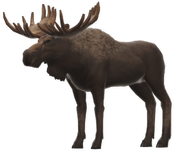 Moose outside of Trapper's Homestead

scratch marks
Add a photo to this gallery

Retrieved from "https://thelongdark.fandom.com/wiki/Moose?oldid=32582"
Community content is available under CC-BY-SA unless otherwise noted.