Edit
watch 03:01
Wiki Targeted (Games)
Do you like this video?
Play Sound

Lots of wind with limited shelter from weather and wildlife

Hushed River Valley is the ninth region to be added to the game. The region connects to Mountain Town via a cave that runs from an area between the Trailer and Spruce Falls Bridge to a ridge top in the valley.

Geographically, the river valley is defined by steep cliffs and canyons; the lowest point lies in the middle of the region, with higher altitudes toward the edges of the map. The central valley features several waterfalls, and there are a few snow shelters that may spawn at higher elevation points (e.g., near the cave that connects to Mountain Town).

Although not the coldest region on Great Bear, the Hushed River Valley is quite chilly, making campfires necessary to avoid freezing, especially during night-time blizzards. Due to the lack of human-made structures, mass produced clothing, food, and tools are sparse; typically only found in hidden caches scattered throughout the region, inside the region's many caves, or near abandoned campsites. Since the inclusion of Bleak Inlet and Ash Canyon, this is no longer the only region to have hidden caches in Survival mode, though it still contains the greatest number of them. The lack of even natural bedding means that having a bedroll is a virtual necessity for anyone wishing to explore the region, although at least one bedroll will spawn somewhere in the region, even on Interloper.

The lack of encroachment by civilization seems to have allowed local flora and fauna to flourish. Animal and plant life are abundant, so opportunities for hunting, scavenging, and foraging natural foods and supplies such as rose hips are relatively common. However, in that same vein, many predators also stalk the region.

In a rough sense, the Hushed River Valley can be divided into four areas. Travel between these areas requires the use of mountaineering ropes.

This is the largest area of the region, and is where the player will first enter the Hushed River Valley from Mountain Town. Four of the five possible player spawns are located here too. Notable landmarks include Cloudtop Falls, located a short distance west of the entrance cave and Stairsteps Lake, located a short distance north of Cloudtop Falls. The Hushed River itself can only be reached by climbing down logs or from its westernmost end near Offset Falls. A rope can also be used to climb up and down the northern bank of the river. Halfway down the river lie the Reclusive Falls, through which the player will have to pass to enter one of the ice caves (getting soaked in the process). Finally, the player can enjoy a panoramic view of much of the region from Valley View Point, near the east of this area on the south bank of the Hushed River.

In addition to the ice caves, there are multiple smaller caves that can serve as shelters. One is located to the northeast of Stairsteps Lake, another along the Hushed River, and two located on the northwestern and northern cliffs of the area.

While this area boasts the most resources, plentiful shelter, and excellent hunting and trapping opportunities, it is likely the most dangerous, with multiple wolf spawning locations scattered throughout, along with up to two bears, so caution is advised, especially given the general lack of ammunition spawns in the region.

This area is the lowest part of the Hushed River Valley, and is located towards the eastern part of the region, encompassing Little Bear and Cub Falls, Twin Sister Falls, Long Shot Falls, the Landslide, Moose Overlook, and Valley Cave. It is possible to spawn in here a short distance west of the Landslide. In order to enter or leave this area, a rather long rope climb from either Pensive Vista or Many Falls Vista is required.

Most players in this area will end up using Valley Cave as their base of operations, as it is the only decent shelter. A distress pistol can sometimes spawn here, and a hunting rifle can sometimes be found next to a corpse located not far to the west.

No bears will spawn here, and there are abundant deer hunting opportunities, along with a rabbit grove for snaring, and lots of cattails for food or tinder. The moose located south of Valley Cave can be hunted, providing a good source of food and a hide, easily cured in Valley Cave.

The area is relatively free from predators and offers great foraging, deer hunting opportunities, but occasionally, one wolf may spawn a short distance west of Valley Cave.

Getting here generally requires either a rope climb from the lower valley, a rope climb through one of the ice caves, or a rope climb near Mammoth Falls, but it is possible to scramble up to this area via several root climbs from the ice cave entrance nearest Valley View Point without using a rope at all. From the ice cave exit, one of the two possible spawn locations for the Mysterious Signal Fire may be found by going due south and cutting through some scrub brush. Other notable landmarks include Mammoth Falls and Quarrelling Falls, located to the north of the area, and Monolith Lake itself, around which can be found Banner Falls, Watchful Falls and Lake Cave. Finally, two more isolated caves can be found, one at Pensive Vista, and Peak Cave, located at the top of a mountain at the east end of Monolith Lake.

Aside from the ice cave entrance, there are a number of other caves that offer good base opportunities. Lake Cave is centrally located, not far from where the moose spawns (making hide curing easier), and offers a possible revolver spawn, but the nearby waterfall may be distractingly loud to some players. The cave at Pensive Vista is a little less central, but is much quieter. Peak Cave offers a very secluded experience and a possible distress pistol spawn, but requires a long, steep climb to access, making sprains rather likely.

This area is relatively free of predators, and offers good foraging opportunities, along with moose and deer hunting and rabbit snaring. One wolf can spawn near one of the entrances to the ice cave network, but tends not to wander too far.

The smallest area of the Hushed River Valley, there are two ways to reach this high, desolate plateau. One method involves travelling through an Ice cave, which requires a short rope climb. The other is to take a much longer rope climb southwest of Many Falls Vista. Once this area has been visited, a rope can be placed near one of the two possible spawn locations for the Mysterious Signal Fire, allowing easier access to Many Falls Vista.

There are three caves located in this area. The westernmost is Lonely Cave, which may contain a distress pistol, but its isolated location limits its usefulness as a longer-term base. The entrance to the ice cave is relatively warm, and offers bioluminescent lighting regardless of the time of day. The easternmost cave is located closest to the rabbit grove, but doesn't offer the same advantages of warmth as the ice cave. The snow shelter at the Mysterious Signal Fire can be used as a short-term base, but is expensive to maintain.

One wolf may spawn on this plateau, but otherwise there isn't any significant amount of game to be hunted here, aside from some rabbits near the easternmost cave.

There are a few high elevation points where a snow shelter (the only type of man-made shelter in the region) might spawn. If found before they decay, the snow shelters may serve as a base (note that they require maintenance and cloth to repair). There is also a chance food and tools may spawn near the snow shelters or inside/near natural shelters. A burned-out campfire may also be found near each of the snow shelters.

While these camps can serve as short-term bases, the lack of sturdy artificial structures means that natural formations such as rock overhangs, cliffside caves, and ice caves will generally serve as the best safe houses in the region.

Storage can also be a challenge, due to the lack of containers. However, one solution as of the Fearless Navigator update is to build a rock cache, which can store up to 30 kg of supplies. This will also make it easier for the player to find their base camp.

One thing to keep in mind is that there is no workbench in this region, meaning that players will not be able to craft many items without a trip to the Trailer, located in Mountain Town.

This region contains special caves called ice caves, which share similarities with other deep caves. Inside the ice caves almost constant cracking (likely from the ice shifting) can be heard echoing from within. Ice caves' walls are grey-blue and appear slightly transluscent; rockier walls may feature bioluminescent moss growing in some areas.

These caves form an extensive network around the region and are important for exploring safely, offering protection from the weather and predators (usually). The many twists and turns in the cave systems and the significant distances between bioluminescent moss patches can make navigation tricky, especially in the dark. Stones, spent torches, or other items can be used as markers to help the player retrace paths through the caves. Spray paint may also be used to make path markers.

There are two ice cave networks in total--one of which may be inhabited by a wolf. Each cave system has multiple entrances/exits, which often have icicles hanging on the rock face around their exteriors; rose hip bushes and other useful flora often grow directly around the entrances, as well. Reaching different parts of an ice cave may require climbing ropes to reach high ledges or passing through frigid waterfalls inside or at the entrances of a cave system.

In addition to the rich natural resources present in the region, along with excellent hunting opportunities, the Hushed River Valley contains some items that are somewhat challenging to get.

The region contains at least 4 hidden caches of food or other supplies. Certain cache boxes will spawn in the same location in every game, while others can spawn in any of several specific locations. Generally, caches may be found tucked into corners and niches near landmarks (such as inside ice caves or beside waterfalls) or near landscape features such as fallen trees or at the top of cliffs.

Caches are small grey boxes with orange lids, and each may contain collections of somewhat related items such as rifle accessories. Most caches have the same level loot as supply caches in Wintermute, with up to 4 high-quality supplies (e.g., mid- to high-level clothing, medicine, and food). These caches can contain fairly rare items, particularly on Interloper difficulty.

One distress pistol, along with a few shells, will always spawn in this region. The distress pistol spawns in either Valley Cave, Lonely Cave, or Peak Cave. This is one of four locations in which it's possible to find this item in survival mode, aside from the Fallen Lighthouse in Bleak Inlet, the Tail Section atop Timberwolf Mountain, and the railbus in the Ravine Basin,

One moose-hide satchel will always spawn in this region, except on Interloper difficulty. This satchel is located at the Mysterious Signal Fire, which may spawn in one of two different locations.

Another item that can be found near the Mysterious Signal Fire is the Mackinaw jacket, which will spawn in all difficulty levels. Although it's not the warmest coat in the game, it's the best coat obtainable in Interloper, and can only be obtained here on said difficulty.

In addition to the many caves, the region has a number of named locations: 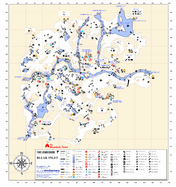 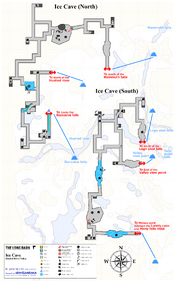 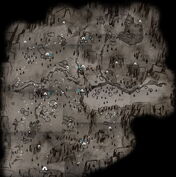 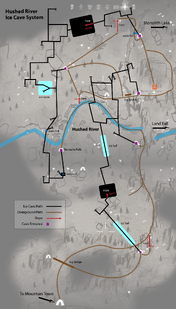 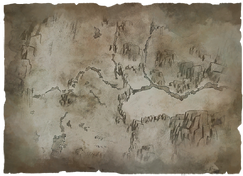 A charcoal map of the region 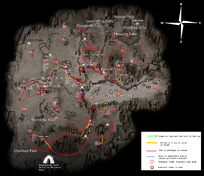 A cave in Hushed River Valley. To rest and to cure hides.