The Long Dark Wiki
Register
Don't have an account?
Sign In
Advertisement
in: Locations, Caves, Locations with a workbench,
and 4 more
English

A mine that connects Pleasant Valley and Coastal Highway

Has an interior
Cinder Hills Coal Mine, also known as "Abandoned Mine", is a series of mine tunnels which connect Coastal Highway and Pleasant Valley.

This mine has three levels: in Survival mode these levels are separate areas, and in Wintermute all three mine sections are interconnected.

The Feels Like temperature inside of mines is very warm on all Game Modes, and since no animals spawn inside they can serve as dark but safe shelter.

Cinder Hills Coal Mine is similar to Abandoned Mine No. 3. They both have long, dark tunnels that connect the two regions together.

Caution should be taken when exploring the Middle Level of the mine: electrified wires and electrified water can kill the reckless, and those who take too long will become trapped when the Aurora ends and the elevator becomes unpowered.

The Cinder Hills Coal Mine is an abundant and renewable source of Coal fuel. Coal is highly valuable to heat a Furnace hot enough to forge Arrowheads, Improvised Hatchets, and Improvised Knives. Coal is also useful on Stalker and Interloper in extremely cold survival situations, to increase Ambient Temperature hotter than wood fires. Coal respawns inside mines after several days.

Tools, First Aid supplies, and Clothing can be found on Corpses, in Lockers, or scattered about. A Workbench can also be found in a room in the center of the mine, though it requires a light source to use.

Firearms and other high-quality loot can spawn in the Middle Level.

Mines are not large but are pitch black beyond their entrances at all hours of day, and feature numerous dead ends or circuits. They can make navigation extremely difficult without a light source. It is advised to bring a Storm Lantern, Torch, or Flare while exploring them.

Caution should be taken when exploring the Middle Level of the mine during an Aurora. Live wires and electrified water will kill in seconds, and if the Aurora ends, the elevator will become unpowered, trapping the player inside until the next Aurora (at least 12 hours, but potentially many days). This hazard can be partially offset by leaving a stockpile of food, water, and a Sleeping Roll inside the middle level beyond the elevator.

A map of the mines (outdate with Episode 3) 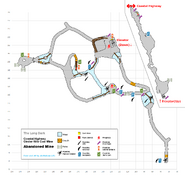