The Long Dark Wiki
Register
Don't have an account?
Sign In
Advertisement
in: Articles in need of images, Regions
English

Edit
watch 02:53
GTA: The Criminal Enterprises - The Loop
Do you like this video?
Play Sound
Images Needed: This article is in need of more images and/or higher quality images. You can help by uploading an image and adding it to the article.

The Trans-Island Railway Line runs through this mountainous region.

Although the weather is fairly mild, many predators roam the region.

Broken Railroad is the seventh region to be added to The Long Dark.

Broken Railroad is described as a section of the Trans-Island Railway Line that was ravaged by earthquakes prior to the First Flare, making navigation rather difficult. The region is connected to Forlorn Muskeg. It is a relatively small region with mild weather, but is home to many predators: 6-8 wolves and a bear, which can be difficult to avoid in the narrow, hilly, and heavily forested region.

Broken Railroad, similar to Desolation Point is a very small region that is quite isolated from the rest of Great Bear Island. It has several rabbit groves scattered throughout, but is very limited in game, with only 2-4 deer spawning west of the Maintenance Yard, and has no fishing at all. If planning to stay here for an extended time on Stalker or Interloper, it is wise to get cooking to Level 5 as soon as possible, which will enable the player to hunt wolves and the bear and provide ample food.

Broken Railroad is a relatively small map, but does feature a number of key locations: 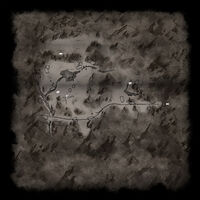 A map of the region from story mode 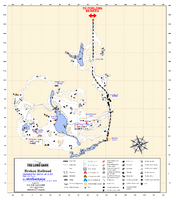 Outdated charcoal map of the region. 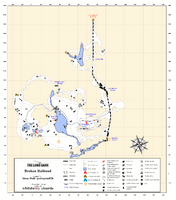 The sun rises over the Maintenance Yard.

The Aurora Borealis over the Hunting Lodge.