The Long Dark Wiki
Register
Don't have an account?
Sign In
Advertisement
in: Pages with update history, Wildlife
English

View source
watch 02:53
GTA: The Criminal Enterprises - The Loop
Do you like this video?
Play Sound

Bears are predators in The Long Dark.

Bears (aka "Black Bears") are large solitary predatory wildlife. They are found inside their bear cave (often with bones inside), or roaming near them. The First Flare has woken them from their winter hibernation. They are among the toughest and most dangerous animals on Great Bear Island; while not as aggressive as wolves, bears are highly territorial and will charge and maul their victims. If killed, bears yield up to 25-40kg of energy-dense bear meat and black bear hide, which is used to craft Bear Skin Bedroll or Bearskin Coat.

Bears have three paces: walking, charging and fleeing. Typically they wander near their bear caves at a slow walking pace, with little interest in their surroundings, but occasionally stop to forage or look around.

Bears are relatively quiet, but their soft-padded footsteps can be heard from a distance. Crows have a unique "bear call" which can be heard when a bear is in the area. At closer distances their grunts and snorts may be heard, and if the bear detects the player they will bellow and begin to follow them. Before charging bears usually rear up on their hind legs and roar, with the "huff-huff" of its heavy breathing as it charges.

All bears have a specific den as their home, usually a bear cave or rocky outcropping. The dens can usually be identified by yellowing skeletons near their entrances. A bear will often return from roaming to their den, taking the most direct path (even if it is kilometers away). A frightened bear often flees for a time before attempting to return to their den.

Bears occasionally return to their den to hibernate for a time, in which they lie down to sleep. In this state, a bear can be awoken by normal stimuli such as gun reports, lit flares, or simply being too close.

Bears will follow any player they detect and attack the player at close distances. If the player moves far enough away, the bear will give up its pursuit. Bears will also charge if they detect the player and the player shoots at them; shots from undetected players usually cause bear to flee, even if not struck by the round.

Bears are attracted by scent. Baiting with dropped scent items while being pursued by a bear will distract them (unless charging). See: Baiting.

Bears are only held at bay by certain fires. Campfires and flares will prevent a bear from charging the player unless it is already within a certain distance. It will wait outside the radius of the fire until the player leaves the safety of the fire or it is scared away. Approaching a bear while it is held at bay will cause it to overcome its fear and charge. While being held at bay, bears will run from weapon fire instead of charging. They will walk or charge around a lit torch on the ground, but it will not stop them, nor will throwing torches or flares at bears cause them to flee.

Bears flee from Distress Pistol reports and from the landing site of flare rounds; the Distress Pistol is the only means to stop a charging bear. Bears are also frightened of bullets and arrows striking near them, but only from undetected players; they will charge attackers if they can detect them (barring Distress Pistol fire).

Performing a critical hit will cause Bears to flee if they survive the initial damage.

Stones deal no damage if striking a bear, and a bear will chase those who throw stones at them (if detected). Stones thrown by undetected players will distract nearby bears to investigate for a few seconds.

If provoked with weapons or approached too close, a bear will charge and maul the player. Only the Distress Pistol can stop a charging bear. Bear struggles are different from wolf struggles in that the player will always lose, getting mauled and eventually passing out. After mauling the player, the bear will walk away but may maul the player again if they do not flee immediately.

Bear attacks cause massive Condition loss, blood loss, infection risk, and usually ruins a worn clothing item (typically one worn on the head, accessory or shoes). Attacks from bears are usually not fatal at high Condition.

Bears may be hunted with any ranged weapon (except Stones) and suffer from blood loss, so a single round is lethal (but may take many hours for the animal to bleed out). A single shot may even kill a bear instantly if it strikes their head and is a "critical hit", but usually bears survive multiple rounds and will immediately charge or flee depending if the player was detected.

Critical hits are random occurrences, but are more likely in designated critical areas (and affected by Weapon Skill). Bears have four areas: head/neck, torso, hindquarters, and feet. Shots to the head/neck have the highest chance to critically strike (~30%), followed by torso, and then hind. Shots to a bear's feet and legs cannot critically strike.

Time to bleed out

It is worth noting that after killing the bear, it is more time-efficient to Quarter the bear than to harvest the hide and guts individually. However, the body of the bear that would be destroyed by quartering is also large enough to grant protection from the wind to campfires and crouching players, which can be useful for players looking to harvest the bear's meat on the spot.

Bear spawns vary by region and Survival Mode. In some regions (Coastal Highway and Desolation Point) bears always spawn in the same location(s); in other regions (Mystery Lake and Pleasant Valley), bears have multiple possible spawning locations which only some may be be occupied in a given save file. The following list is a list of possible bear locations:

A bear during attack

A bear during an aurora 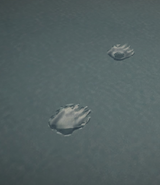 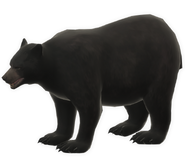 Bear held at bay by a campfire

Bear held at bay by flare

Bear charging past a torch