Lots of high rope bridges. Weather can often be poor. Some shelters scattered throughout.

Ash Canyon is a region released on December 7th, 2020, in the Hesitant Prospect update. It was first announced in 2020 along with the Halloween event and subsequent Challenge: Escape the Darkwalker. It is the 11th region added to The Long Dark.

Ash Canyon can be accessed from two locations in eastern Timberwolf Mountain: the eastern end of the Echo Ravine basin which leads to Bitter Marsh, and a transition cave east of Deer Clearing to Pillar's Footrest.

Traveling to higher elevations requires either lengthy detours or multiple rope climbs from the lower areas of the region. While traveling at higher elevations, there is little risk of hostile wildlife, but traversing rope bridges can pose serious risks since falling from them is fatal. In addition, the limited availability of food, especially on Stalker and Interloper with the presence of Intestinal parasites in wolf and bear meat, will likely prevent lengthy stays in the upper areas without utilization of starvation tactics.

Two pieces of gear are exclusive to Ash Canyon: crampons and the technical backpack (not to be confused with moose-hide satchel).

Both are located inside of the Gold Mine by a frozen corpse to the region's northwest. Similar to other mines on Great Bear Island, the Gold Mine's interior is dark and warm; its interior also contains shallow pools of cold water and an underground waterfall which must be passed through.

Despite the challenging environment, these items make exploring Ash Canyon and other regions easier. The backpack increases carry weight, and crampons help during rope climbs and navigating steep hills.

Ash Canyon features steep terrain and numerous plateaus separating lowland areas (like Hushed River Valley), and offers few man-made shelters, many of which have been severely damaged (like Pleasant Valley).

A defining feature of the Canyon is its challenging terrain: specifically numerous rope climbs, slopes which can be slid down but not climbed, and regular extreme cold. At first some locations are only accessible via winding paths through cliff sides and tunnels, but once discovered mountaineering ropes may be deployed for shortcuts in the future. GO! Energy Drinks, coffee, and Emergency Stim are useful for emergencies, but strategic planning is best (e.g. avoiding climbs whenever possible, and careful planning).

Numerous shallow and unnamed caves litter Ash Canyon, providing wind protection and resources, but little warmth bonus. As of to Patch 1.93+ all Ash Canyon caves provide some warmth bonus, if slight, acting more similarly to caves in other regions. Constant cold, harsh weather and limited shelter necessitates regular use of campfires, especially overnight to avoid freezing. Firewood and sticks are abundant throughout the region, as are other natural resources including: cat tails, rose hips, reishi mushrooms, birch and maple saplings.

Wildlife is sparse throughout Ash Canyon and mostly confined to lower elevations, although there are a few rabbit groves at higher elevations and a bear spawn near Miner's Folly. Wolves of Ash Canyon tend to patrol the narrow passages in the lowest areas of the region, preventing easy travel to Angler's Den and Broad Falls. However, this means that one can travel through higher elevations with meat and hides without attracting predators, the only exception being the Bear near Miner's Folly. When entering the region from the Deer Clearing Mine in Timberwolf Mountain, it's possible to reach the Mine without a single wolf encounter, although this route requires three consecutive rope climbs up an exposed cliff face. Few rabbits are present and a moose may spawn at the bottom of the rope climbs in the west; a second moose may spawn in the southeast in Bitter Marsh near the broken fishing hut (which provides shelter from wind and animals).

Homesteader's Respite provides an attractive base option. Once reached for the first time (from above), a climbing rope may be deployed for easier future access from below. It is also not necessary to climb down, as the landslide near the homestead provides a safe path to scramble down. With the nearby broken fishing hut and a lack of nearby predators, this is likely the most sustainable base in the region.

Work benches are also present, including one inside Angler's Den and an outdoor bench at Miner's Folly. Arrowheads may be found at some locations (e.g., Angler's Den), enabling limited access to hunting without the need to cross several regions to the closest forge.

There are a number of discoverable locations in this region. 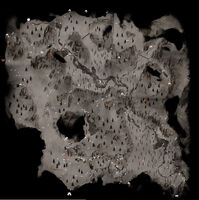 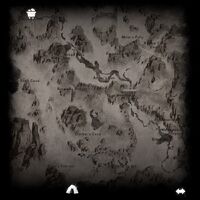 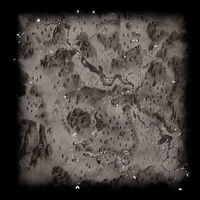 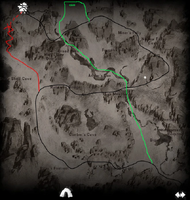 Ash Canyon map, plus the paths to the Gold Mine (useful for if you just want the Technical Backpack and Crampons). Black takes longer, yet is the "scenic route" (aka goes the intended way), while Red is faster and comes in through the mine's back entrance.Third route (green) to Mining Camp. Easily accessible from Angler's Cabin. There is a path to the right of the waterfall that leads to a cave with one tiny rope climb, and then you're pretty much at the top. Huge shortcut. 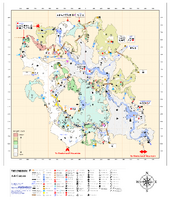 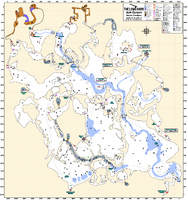 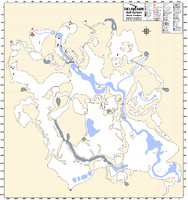 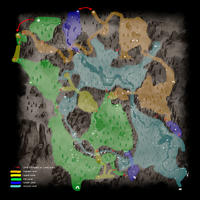 The colors from lowest to highest are Light Blue, Dark Blue, Green, Yellow, and finally Gold. Red arrows indicate a place to climb if the rope symbol is present, or a place that requires a one-way jump to access via that direction. 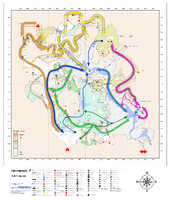